Marx and Engels in Hell

Posted on February 2, 2014 by briansandberg

For centuries, Christian churches have depicted elaborate scenes of the Last Judgment and the punishments of the damned in Hell. Many Catholic and Orthodox churches devote an entire wall to painted or frescoed portrayals of the torments of Hell.

In medieval and renaissance paintings of Hell, the damned are usually identified by their worldly occupations: farmers, soldiers, prostitutes, priests, bishops, or kings. These poor souls are tortured by devils and demons according to the specific sins they have committed: lust, gluttony, avarice, sloth, wrath, envy, and pride. These portrayals could be  terrifying, whimsical, or bizarre—consider the late fifteenth-century paintings by Hieronymus Bosch. Paintings could also be controversial, since painters could make allusions to contemporary political and social situations in their rendering of the damned.

Depictions of Hell still have the power to stir debate. 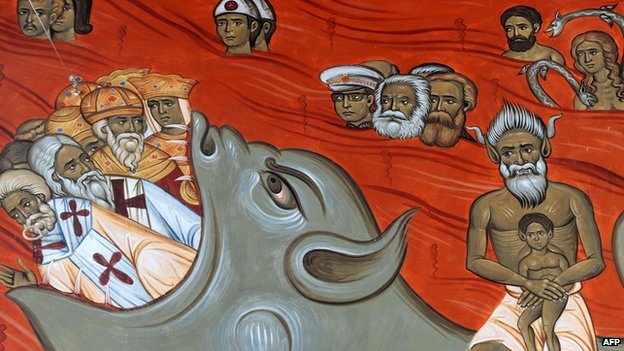 According to the BBC: “A church in Montenegro has sparked controversy by displaying a fresco depicting Yugoslav communist leader Josip Broz Tito in the fires of hell with Karl Marx and Friedrich Engels.” The frescoes are located inside the newly restored Church of Resurrection in Podgorica, Montenegro, a Serbian Orthodox church.

A church leader indicated that Marx, Engels, and Tito “personify communist evil in the Balkans” and the artist should be “allowed the freedom to see things as he wishes.”

Intersections of religion, nationalism, and politics are not new in the Balkans. The frescoes provide a stark visual reminder of the continuing power of religious nationalism in the region.

The BBC reports on the frescoes.

1 Response to Marx and Engels in Hell